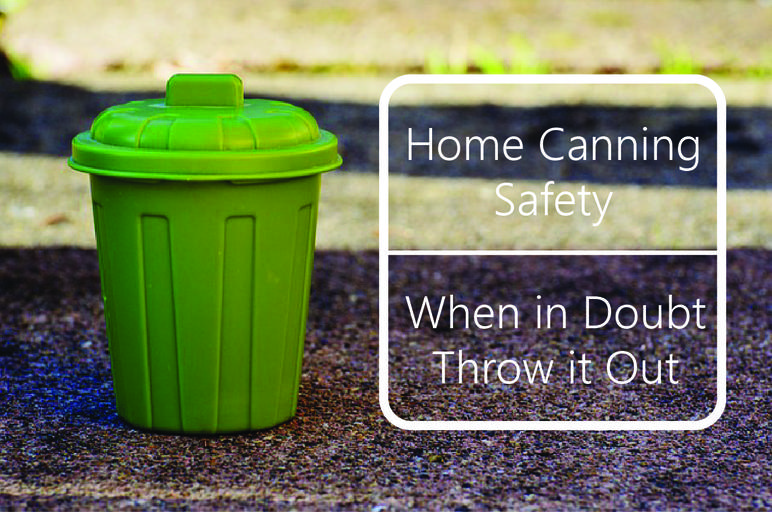 “When in doubt, throw it out” is a classic home canning mantra, and it’s probably the most important one that you can learn before getting into food preservation.  Its meaning is clear – unless you’re 100% sure that your food is safe to consume, don’t eat it.

Food starts to spoil immediately after harvest or slaughter through multiple mechanisms including: light exposure; autolysis; oxidation; and most importantly, bacterial putrefaction.

Many different types and strains of food-spoiling microbes exist. Some grow at low temperatures (like the refrigerator), some at mid-range temperature (the danger-zone) while some even grow at very high temperatures (thermophiles). This broad spectrum of life ensures that no matter how you store your unprocessed food, it will eventually spoil.

Limiting these sources of decomposition is the key to keeping your food fresh. Spoilage is usually accompanied by some pretty obvious sensory indicators. We’ve all had to stifle a gag after discovering that forgotten sandwich residing in the depths of our fridge. Stumbling upon “rotten” food is always an unpleasant experience and you certainly wouldn’t want to eat it. However, ingesting spoiled food won’t necessarily end up with a stint in the emergency room. In fact, most spoilage-causing bacteria are harmless when ingested. For example,  Pseudomonas spp. and Brochotrix thermosphacta will introduce an unpleasant  odor, taste and slime to your food but secrete no toxins and aren’t pathogenic.

Unfortunately, not all bacteria are so friendly. In fact, a few of them are actually quite dangerous. These are known as the pathogens. Pathogenic bacteria can cause severe illness and even death to individuals who consume them. These hazardous food-borne bacteria pose a risk for all home canners. So, we’ve compiled a list of four of the most dangerous to show why it’s so important to adhere to the mantra- “when in doubt, throw it out”.

Salmonella is a particularly nasty bacteria that’s commonly found in the intestines of animals and birds. As a result, it is usually transmitted when people eat foods contaminated with animal feces. All types of foods can become contaminated and eating them can lead to infection, causing salmonellosis. Symptoms of salmonellosis include: diarrhea; vomiting and fever. Most people who become infected with salmonella recover within a few weeks.  However, in some cases it can result in serious illness or even death.

While the overall mortality rate of the disease is fairly low (under 1%), there are variations of the bacteria that can be more fatal. Salmonella poisoning certainly is a deadly food-borne pathogen, but proper processing of canned food  will mitigate the risks significantly.

Listeria is a food-borne bacteria that is found everywhere in soil, sewage and untreated water. These sources often pass the bug onto the fish, meat, fruits, vegetables and dairy that we consume. Infection by Listeria bacteria causes a disease known as listeriosis. Individuals who become infected can start to exhibit symptoms from 3 – 70 days of eating contaminated food. Fever, Nausea, Diarrhea, cramps, vomiting, headache, constipation and muscle aches are common symptoms of the disease. However in severe cases the bacteria can cross the blood-brain barrier and spread to the nervous system. Such a spread often results in more serious neurological symptoms and can even be fatal.

Fortunately, an extremely large number of bacteria need to be present on contaminated food for infection to take hold. Nevertheless, taking proper processing precautions is vital to prevent Listeria from taking root in canned food.

E.coli lives in the gut of humans and animals, and has been shown to play an important role in protecting their host from various diseases. However, certain Shiga toxin-producing strains of E.coli (STECs) synthesize a toxin that can cause illness in humans. These bacteria are most commonly found in cows, but are occasionally present in other commonly canned foods as well. Symptoms of Shiga-toxin poisoning progresses in stages, starting mildly but progressing into severe cramps, nausea and bloody diarrhea.

The illness is most dangerous if the Shiga-toxin gets into the bloodstream, which can cause the kidney’s to shut down. Pancreatic damage and impairment of the nervous system can further complicate the illness. E. coli poisoning will not be a problem for the home canner who follows correct processing protocols and is easily deactivated by water bath canning. However, it is always a risk if your food was improperly processed or sealed.

C. Botulinum is the most important pathogenic bacteria to consider when discussing canning safety. Mainly, because it becomes dangerous only under certain conditions. Conditions which are met by canned low-acid foods. Botulinum seals itself within a spore when it comes into contact with oxygen because it is anaerobic (oxygen-hating). Upon being moved to a moist, low-acid and oxygen-free environment, it germinates and begins to grow. Once a culture is established, the bacteria releases a deadly neurotoxin that you may know as Botox. If ingested, Botox causes botulism, a paralytic disease that can be lethal if it reaches the respiratory system.

Unfortunately for the unknowing canner, this environmental change occurs the moment that you seal your vegetables, fish or meat in a jar. Botulinum spores are very resistant to heat and the amount of time required for processing at the temperature of boiling water is greatly increased. That’s why pressure canning is highly recommended when processing low-acid foods.

To learn more about botulism, and how to control it follow this link.

When in Doubt, Throw it Out

Many food-spoiling bacteria leave obvious signs of their presence. Their unpleasant tastes, odors and appearances make it crystal clear that a bounty has spoiled. Unfortunately, the above-listed pathogens don’t leave any of these telltale signs. You simply cannot determine from its taste, odor or appearance whether or not your food is contaminated. The detection of food-borne pathogens requires rigorous scientific testing and it’s often impossible for the average home canner to know if they’re sealing up a deadly poison. Whether it be concern over your processing method, a faulty seal or just a bad feeling- when in doubt, throw it out.

Feel free to leave us a comment, story or fact from your personal canning experience. We would love to hear from you!